Only one month left of 2012. The year has flown by rather quickly. Looking forward to 2013 and the  challenges and rewards it will bring.

I began teaching my first course for the Certificate of Illustration program at Minneapolis Community & Technical College in early November. The class is called Introduction to Illustration. The students are eager to learn about the field of illustration and I am happy to get the opportunity to share my knowledge and expertise with them.

In mid-November, I was honored to be awarded the Society of Children's Book Writers and Illustrators (SCBWI) Mentorship Program. It is an award the society gives out every year to a promising illustrator whose work has reached a high level of quality,  but who could still use some guidance and feedback from an established local illustrator. The illustrator this year is Jennifer Emery, an experienced, successful artist who has produced numerous illustrations for advertising and children's books. According to the program, Jennifer will act as my mentor for one whole year, in which I can ask her questions and get her input on a continual basis, while I develop a plan on where I want to direct my illustration career for the future. I am excited to be able to get the opportunity to work with a talented illustrator such as Jennifer and learn as much as I can from her.


Below is an animated film I made years ago as a student at the Minneapolis College of Art & Design (MCAD). Being in the days before computer animation took over the industry, I created the film using the traditional technique of drawing each movement on clear sheets of acetate, which are called cells. Although rather amateurish and primitive, the film still has a certain charm about it. The inspiration of the "story" is based from the classic Warner Bros. cartoon, Duck Amuck, directed by the legendary animator Chuck Jones. Adding to the quirkiness of the plot, the music is from Phillip Glass, the modernist composer.


Here are a few videos I produced fairly recently, in which I edited in my Mac through iMovie.  The first is called Cool Ride. The second is named Morning.


Have a Merry Christmas and Happy New Year!

Posted by Stu Fjellanger Blog at 6:01 PM No comments:

Hello all,
In mid March, my fellow MFA students and I gathered in Ft Worth, TX. Local illustrators, many of them successful and highly respected in the illustration industry, came to Texas Christian University to present their work to us. Some of these talented artists included Jack Unruh, John Collier and Bart Forbes. Meeting these individuals in person and hearing them talk about their work was fascinating and inspirational. On the Texas trip, at the Ft Worth Stockyards, I remembered there was a corral that held a number of Longhorns. Seeing these large beasts up close impressed me very much, so I decided to illustrate one after the Texas trip: 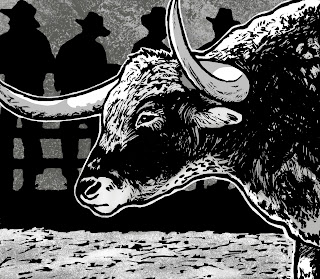 In early June I finally finished my MFA thesis paper.  The paper is called Tradigital: Merging Old and New. In the paper, I described my process of using a combination of traditional art-making materials (i.e. linocut printmaking) and digital tools (Photoshop, Corel Painter) to produce a distinctive style of illustration.  For subject matter I chose to illustrate scenes based on the story of Swiss legend William Tell. In addition, I created six iconic images of food and beverage that were entirely produced digitally, but still maintain a lino-cut print look.

Here is an example from each series: 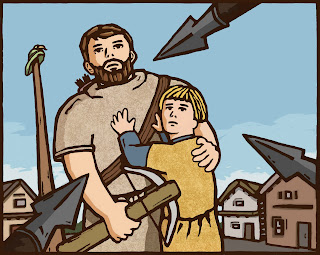 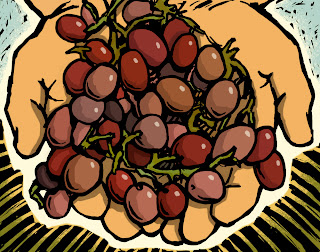 I graduated on July 20th. What I have learned in The Hartford Art School’s MFA in Illustration program has been invaluable to me. Being surrounded by such talented artists, whether it be faculty, guest presenters or fellow students, has made me a better illustrator and educator.

SMF
Posted by Stu Fjellanger Blog at 12:40 AM No comments:

Spring is approaching, and warm temperatures are slowly beginning to creep into the air, at least here in Minnesota. Soon things will be green again.

I recently had the opportunity to create an illustration for the Writer Magazine. The piece was for an article on how poetry can be used to tell a story. For the article, a few examples of poems with a narrative were discussed. One poem was from Emily Dickinson called "I Heard a Fly Buzz". It is about a young woman dying in her bed as a fly buzzes around her room.  For the illustration, I decided to focus almost entirely on the fly by showing it crawling alongside the wall while the image of the dying woman is reflected in the vermin's eye. The scene contains a combination of mystery, sadness and beauty which properly fits the strange and rather macabre theme of the poem.  Here is the illustration: 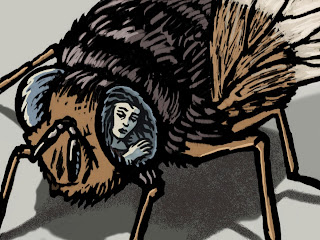 On March 18th I will be traveling for the MFA in Illustration program through the Hartford Art School, University of Hartford, CT. This time to Dallas, TX for about a week. I am looking forward to meet local illustrators from the Dallas/Ft Worth area and hear them speak about their work and the field of illustration in general. It will be good to see my fellow students again and observe some of the culture of Texas (rodeo, barbeque, etc...).

Stu
Posted by Stu Fjellanger Blog at 7:20 PM No comments: